Night of the Fermenting Dead Part 1

Srujana and Amber, having narrowly survived their encounter with the office poltergeist a year earlier, travel to the Midwest expecting a pleasant trip. Instead, they come face to face with Amber’s worst nightmare. How will the duo defeat their supernatural foes and manage to save the fermentation run at the same time?

You can find Srujana and Amber’s first adventure here. 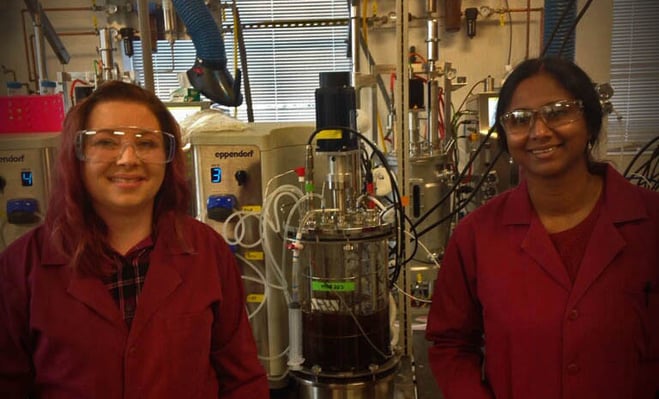 “Why are we going to the pilot plant tonight?” I questioned as I drove down the long, dark stretch of Midwestern highway. Brown, naked fields passed us on either side, while discarded corn stalks littered the earth like cadavers. “Can’t we wait until morning to come back?” The clock on the dash read 10:13 PM.

“I told the plant manager we would come today,” Srujana replied in her always patient demeanor. “Neither one of us can help that our flight was delayed and we need to be there to supervise the inoculation of the main tank.” We were on our way to visit the fermentation pilot plant at the local university we were working with.

Srujana and I had battled a poltergeist on Halloween night last year, and I wasn’t in the mood for any supernatural shenanigans this time around. “I’m just disappointed our trip was pushed back to this week because I made a great costume I was going to wear.” “Oh really? Better than your paramecium outfit?” “Oh yeah. I was going as my favorite plant pathogen, Gymnosporangium juniperi-virginianae. It’s the causal agent of cedar apple rust. My telial horns were wicked.” Srujana laughed as she shook her head. “I would tell you you’re such a nerd, but you already know that.”

Within minutes I had turned the rental vehicle into the plant’s parking lot. The sizable facility was foreboding in the dim light that illuminated the lot. “I’m actually really excited about this trip,” I said as we unloaded ourselves from the car. “I’ve never seen a 7500 liter fermentation tank in person.” “It’s certainly rewarding to see what we do in the laboratory scaled up to a larger volume,” Srujana replied. “That’s one of the things I like most about fermentation. You start small and continue to grow.” As we made our way to the front office, I felt the hair stand up on my neck. This has never been a good sign in the past and I was immediately set on edge. I glanced furtively around to see if anything was behind us, but nothing stirred in the night.

I’m just imagining things, I told myself. That incident with the poltergeist really did a number on me. It was true that last year’s “adventure” had made me more paranoid than ever, which was saying a lot. I shook my head and shoulders to regain my composure, then followed Srujana to the door.

“This is strange,” Srujana commented in front of me. “What’s wrong?” “The door is open. This facility is under lock and key 24/7. You need an escort just to be let into the building. I can’t imagine the door would be unlocked, especially this late at night.” The familiar sense of dread began to build in my stomach. Just once I’d like to have a peaceful Halloween, I thought wistfully to myself.

“Stay behind me,” I instructed Srujana as we went through the glass doors. The office was deserted, save for a gangly devil’s ivy that spilled over onto the front desk. “They usually have someone sitting at the desk, even after hours,” she commented. “I emailed the plant manager earlier to tell her we would be arriving around this time, so someone should be here waiting for us.” “Where would the plant workers usually be?” “They’re scattered throughout the plant working in various areas.” “Well, let’s see if we can find someone and figure out what’s going on.”

After a few minutes of searching, we were still alone. “I don’t like this,” I commented to Srujana as we continued to weave our way through the plant. “Something’s wrong. All of the workers wouldn’t just disappear, even if they were on break.” “Maybe… maybe they…” Her voice trailed off as knocking noises floated through the plant. “Is that normal?” “I don’t think so,” she responded in a small voice. “Okay, I think it’s time to get out of here.” We had begun to make our way back towards the office when a figure appeared in our path.

“Oh thank goodness,” Srujana breathed with relief. “I was beginning to get scared. See, you worry for nothing,” she reprimanded me gently. I held out my arm to stop her from advancing. Something seemed off about the shadowy figure. The man’s top half leaned slightly, and the angle at which his left leg rested didn’t seem possible for a normal human being. I pulled a flashlight from the bag hanging at my side and clicked it on to illuminate the figure.

The man was dead, and from the state of his flesh and the bit of clothes that remained, he had been dead for a long time. Srujana screamed before I could tell her to remain silent. I grabbed her arm and shushed her quickly. The combination of the light and ear shattering scream seemed to jolt the departed man to action and he began to advance toward us. He walks pretty damn fast considering that broken leg, my inner voice commented. In other situations I would have been impressed instead of petrified with the speed he was gaining.

“Follow me!” The two of us turned to run back the way we had come. “I’m usually not a “told you so” kind of person, but I would like to point out, I told you so,” I managed to gasp between deep inhalations of breath. “Is this really the time?” Srujana retorted. “Not really, but if we die, I want to feel vindicated before we go.” Srujana’s eyes were orbs of terror as she ran next to me. “We’re not going to die. I’m sorry, I say stupid things when I’m really scared.” Okay, I kind of meant it, but she doesn't need to know that.

We stopped running when we were out of hearing range of the man’s knocking as he pursued us. We hid behind a seed tank to catch our breaths and figure out our next move. “Was that a zombie? A real life zombie?” Srujana questioned with wide eyes. “No, that was a reanimated corpse.” “Do you really have to be sarcastic right now?” “I’m not being sarcastic,” I hissed. “Zombies are a very specific type of undead. They were originally conceived of by Haitian slaves, who believed that those who committed suicide to escape slavery would be condemned to continue roaming their master’s fields for eternity, forever trapped in their bodies.” Srujana looked at me disbelievingly. “One of the first things you learn as a young witch is that accuracy matters. It’s another reason why we make such good scientists.

“My gut feeling is there’s a necromancer somewhere in this plant controlling this corpse.” “You mean corpses,” Srujana corrected as she pointed behind me. I sighed before looking over my shoulder. Seven corpses in total were making their way through the complex with alarming speed. “It figures,” I muttered under my breath. Why raise only one dearly departed when it’s almost as easy to raise a horde?

Read all posts by Amber Smith