Did you know bacteria have immune systems? Yes, even bacteria need to have a way to fight off viruses that make them sick! Bacterial immune systems differ from human immune systems - humans are multicellular and can dedicate whole organs, and large amounts of energy to developing an immune system that recognizes and destroys invaders. The human body uses proteins called antibodies to detect harmful invaders and keeps an immunization record of all of the sicknesses it has had in a lifetime.

Bacteria are single cells, so they can’t dedicate whole organ systems to protecting themselves. Instead, they have evolved a few different types of immune systems that protect them from viruses and other pathogens. CRISPR-Cas is one type of immune system used by bacteria. This specific type of immunity allows the bacterium to recognize harmful viruses that attack it, remember these foreign invaders, and destroy the virus before it can harm the bacterium again. The bacterium is able to do this by storing a piece of DNA from the virus in its own genome and comparing that sequence to all DNA that enters the cell to see if it matches. If the cell recognizes the virus in the future, it cuts the viral DNA before it can infect the bacterium.

We wanted to search the AgBiome collection for these immune systems, so we worked with an N.C. State graduate student to develop a program. This resulted in a custom software tool to scan all 40,000+ bacteria in our collection for CRISPR-Cas systems. When our new tool, called CRISPRdisco, searched the genomes of the AgBiome culture collection, we found thousands of unique CRISPR-Cas immune systems. Groovy! Now we’re trying to understand how they work. An interdisciplinary team of molecular biologists, microbiologists, bioinformaticians, and plant biologists are studying these systems to get a better idea on how they recognize and cut DNA. 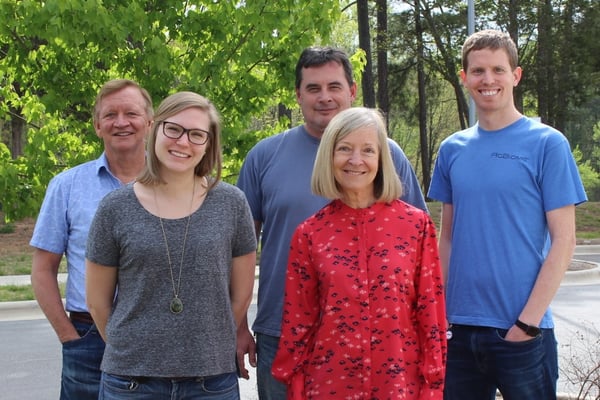 So why is an agriculture company interested in bacterial immune systems? It’s because these systems are at the forefront of genome engineering technology. Over the past several years, scientists have taken CRISPR-Cas immune systems from bacteria and used them to generate precise genome modifications in plants. CRISPR-based genome editing tools are more precise and easier to use than traditional editing tools and allow us to improve crops faster than traditional breeding methods. We can select specific traits, such as drought tolerance or pest resistance, and improve plants quickly. By understanding and using the bacterial immune system, we can create stronger, healthier plants that require fewer pesticide inputs, and help meet future  food demands. LifeEdit, a subsidiary of AgBiome, LLC, is harnessing the power of CRISPR-Cas systems to solve real-world problems in agriculture, pharmaceuticals, and beyond.

Animation on how CRISPR works. Published by Nature Video.