A Day in the Entomology Lab

This week we followed two AgBiome entomologists into the lab to get a taste of what working with insects can be like. And yes, a few people here do enjoy eating insects, YUM! Meet Marie Encarnacion and Elka Armstrong. 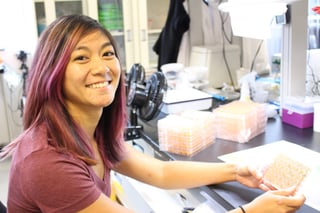 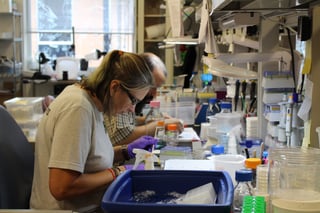 Marie spends a good part of her day tending to assays testing efficacy of biologicals and traits on the caterpillar pests, corn earworm and fall armyworm. Both of these caterpillars are economically important on corn. A typical day for Marie might include treating diet plates with proteins sourced from our strain collection, infesting them with insect eggs, then determining strain activity by rating insect stunting and mortality. She also works on developing and improving new insect assays to test potential product candidates. 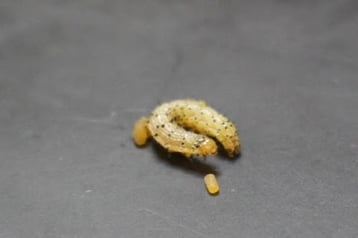 Eggs of the corn earworm are very small with only 5 to 10 eggs placed into each assay well. After hatching, they feed on the diet and grow in size. As you might imagine, this type of work requires a lot of hunching over small Petri dishes to set-up and score assays.

A typical day in the lab for Elka can also be hard on the back. She, along with another AgBiome team member, are responsible for stink bug colony care in addition to other lab assays. AgBiome has three different colonies of stink bugs including the brown marmorated stink bug, the brown stink bug, and the southern green stink bug.

Care for the stink bug colonies is very labor intensive with cages being changed and cleaned one or two times weekly. They also have an expensive diet and require organic green beans to complete their life cycle. To maintain a high quality and constant supply of food for our insects, the greenhouse team grows green beans year round. 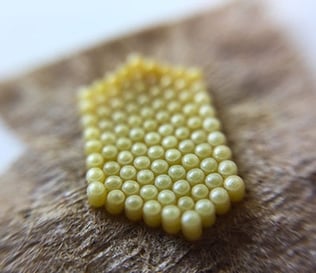 Stink bugs have several stages of growth, known as instars, before reaching maturity. Their life cycle starts by hatching from eggs (left), followed by several molts. The little guys pictured above (right) are second instar southern green stink bugs that are used for lab experiments. Some of these immature stink bugs are kept through adulthood and placed into breeding cages to maintain a large colony for future testing.

In addition to changing colony cages and feeding the insects, providing suitable spaces for breeding is paramount to maintaining a thriving colony. Each species of stink bug requires different types of environments for breeding, for example, southern greens like larger enclosures with open spaces and prefer to lay their eggs on hanging paper towels. Elka collects eggs from cages every day for rearing in separate, smaller cages to raise the next generation of stink bugs for assays. 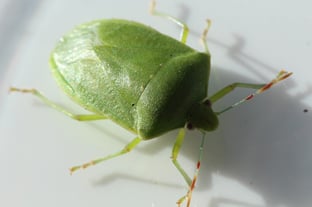 In the future, entomology will be focused on creating more high-throughput insect assays and investigating in-house colonies of beneficial insects for our greenhouse spaces. Additional insect pests are also tested at AgBiome and will be discussed in “Day in the Entomology Lab Part 2”.

Special thanks to Elka Armstrong for the stink bug photos! If you are interested in meeting some of the AgBiome entomology team members, they will be hosting a fun, hands-on booth during the annual BugFest Event at the NC Museum of Natural Sciences on Saturday, September 16th, 2017!
Event details: http://naturalsciences.org/calendar/bugfest/ 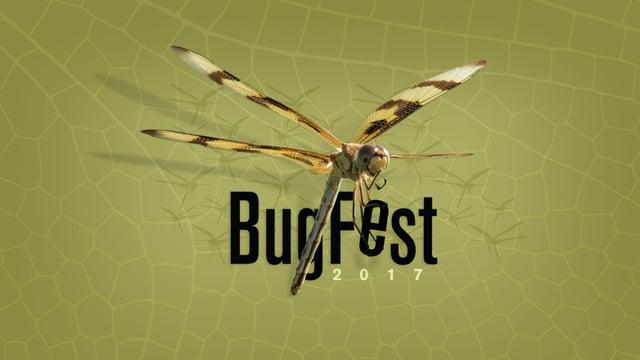