Fear No Weevil - Part 3: The Field

AgBiome Entomology Tech Lead and blog writer, Chad Keyser is back with Part 3 of his "Fear No Weevil" series. In this entry, Chad writes about his experience in Uganda with National Crops Resources Research Institute (NaCRRI). If you missed Part 1 and/or Part 2 or would like to re-read them, follow each link.

As I looked out over the freshly cleared land I felt overwhelmed. We had two days to transform several acres of red-clumpy dirt into a field trial that consisted of 107 experimental plots with five ridges and 75 plants in each. The field needed to be laid out symmetrically with all the plots evenly spaced and perfectly square; we needed to dig the ridges, mix and apply the treatments, and plant the 4,500 sweetpotato vines. No small feat considering all of this was to be done with a small team and hand tools.

We would be testing four entomopathogenic fungal strains, isolated from the Ugandan soil, which showed significant potential when evaluated in the lab for how well they killed sweetpotato weevil. However, it is critical that we confirm their activity in the field.

When I stepped out of the truck I looked around in vain for some type of surveying equipment that would ensure our lines were straight and our corners tight. Instead, Paul Musana, one of the field technicians at NaCRRI, handed me a roll of twine, a couple small sticks, and a tape measure—I was a bit perplexed how this would help. This was the first of many reminders to let experts make decisions, and when it came to setting up sweetpotato field trials in Uganda, Paul and the rest of the NaCRRI team were the experts. They quickly showed me how we could apply the pythagorean theorem, something I hadn’t thought about since 7th grade, to measure right angles on two corners of the field. From there, it was just a matter of keeping the string straight and working as a team to place stakes in the ground everywhere we wanted a row.

Next came ridging. “Surely this is going to take a couple of days,” I thought. Once again I was shown just how little experience I had. In what appeared to be an almost casual labor, the Ugandan team spread out across the field and effortlessly threw dirt into five-meter long mounds. Wanting to emulate their skill and thinking I could at least do as well as the teenagers, I asked if I could borrow a hoe and give it a try. It only took a few minutes to realize how much of what they made look easy was actually carefully honed technique—but at least we all got a few laughs at my attempt. To my amazement, by the end of the first day the field was prepared, the plots were labeled, and we were ready for planting.

The second day started a little rough. Our plan was to soak the 75 vines in the various treatments before planting, though none of us had experience with this part of the setup. The fungal treatments were unformulated and didn’t go into suspension easily. Once we figured out how to mix the suspension, we had to soak the vines, spread them evenly across the mounds, and plant them. Each treatment was being applied to five replicated plots and three different varieties of sweetpotato. This took a lot of coordination and the first few attempts were a bit clumsy. However, by lunch we figured out the process and made assignments for each step. The Ugandan team quickly caught the vision of what we were doing and deftly got into a rhythm. With the procedures in place and the teams aligned we were able to finish planting just before the rain started that evening.

As we gathered at the side of the field, I reflected on what we had accomplished in the last two days. Once again, I felt overwhelmed. Not by the amount of work completed, rather by how smoothly we worked together. We were from different sides of the globe, we didn’t all speak the same language, we had different life experiences and backgrounds, and yet, we overcame the challenges, found ways to communicate, and learned to trust each other. We laughed, we joked, and ultimately, developed comradery and friendships. Two days later, we set out to repeat the same setup at a new location with a new team - but this time I had full confidence in what we were doing and our ability to do it.

Now, we wait to see if our treatment protects the sweetpotato plants from what is known to some African farmers as the “evil weevil''. 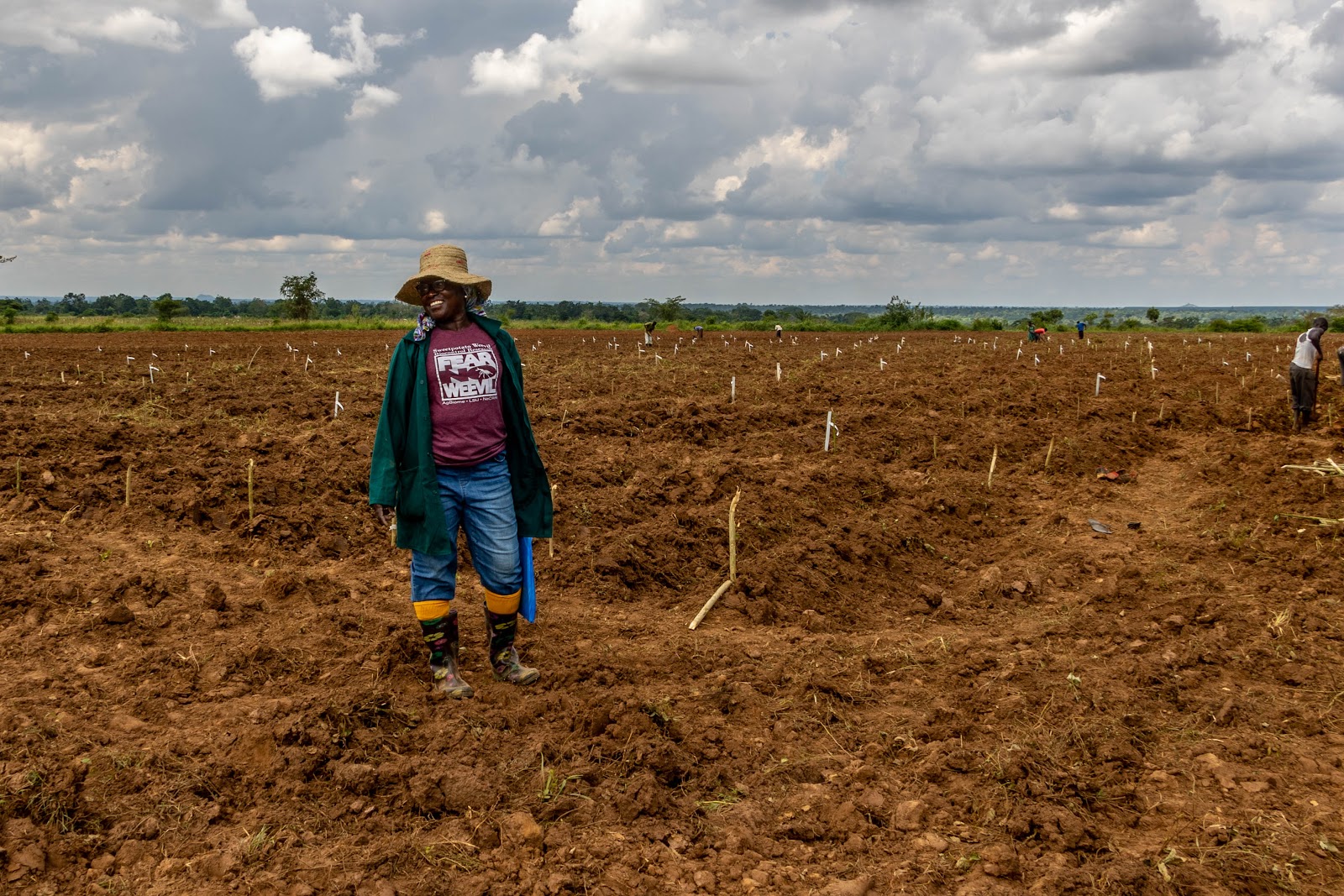 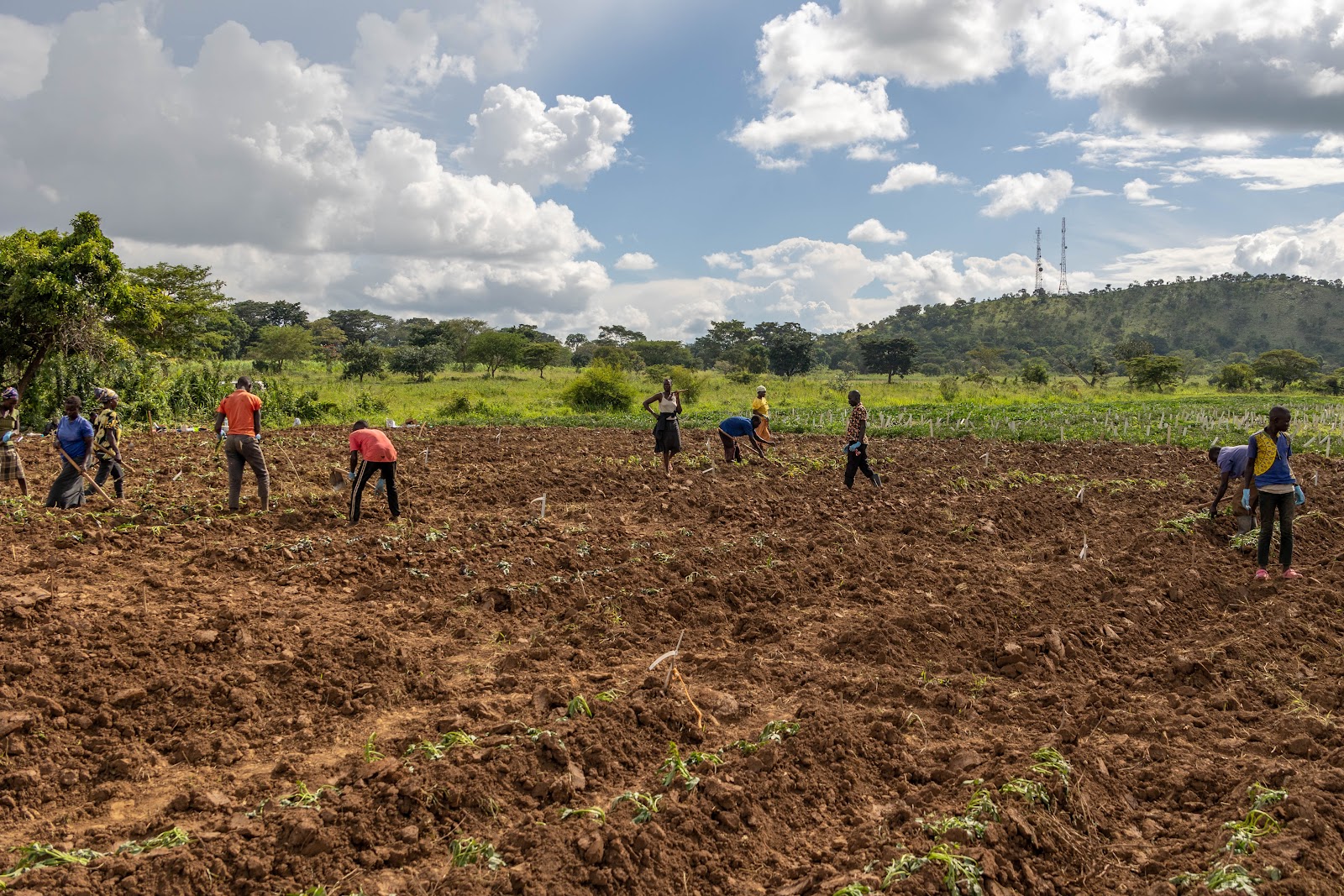 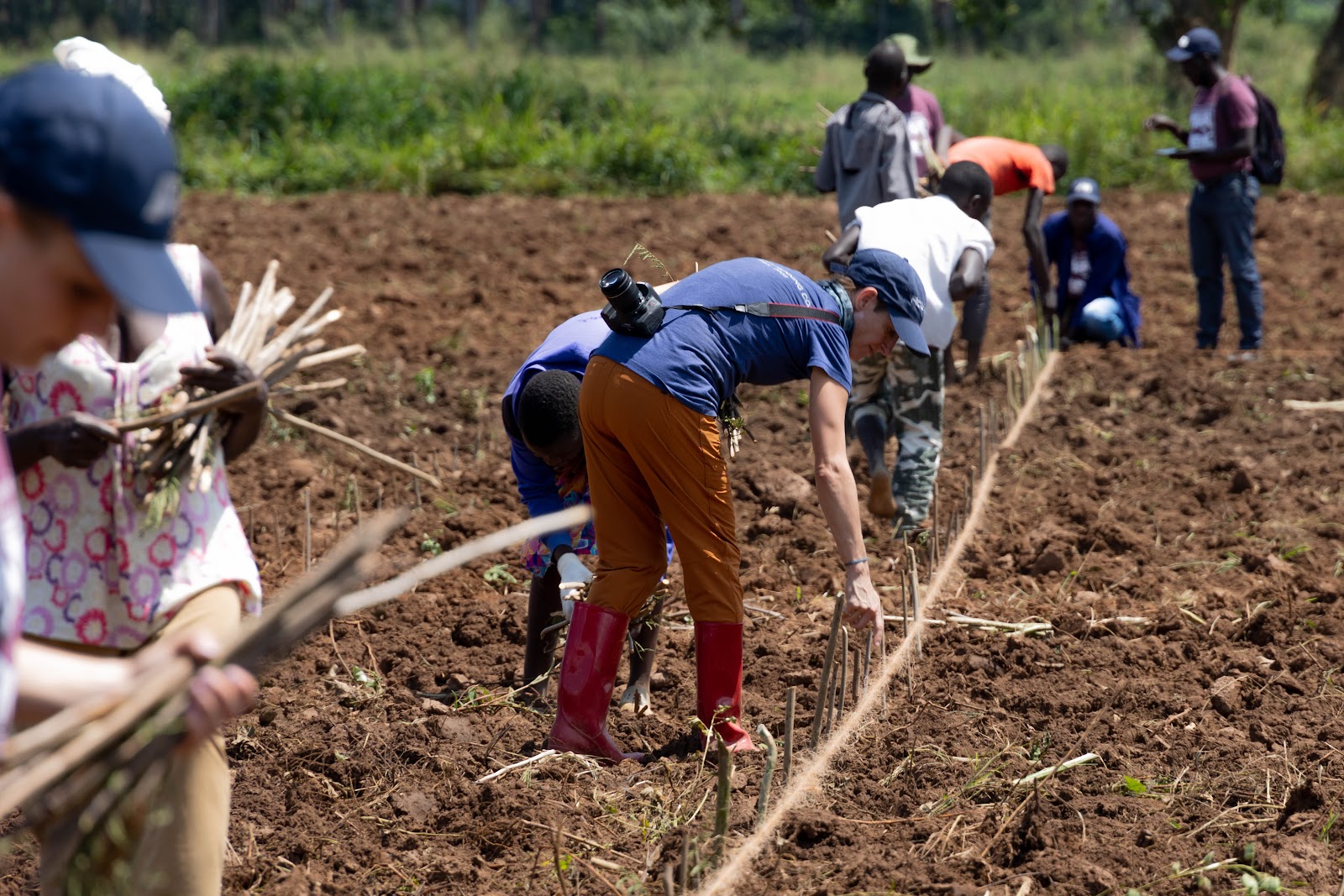 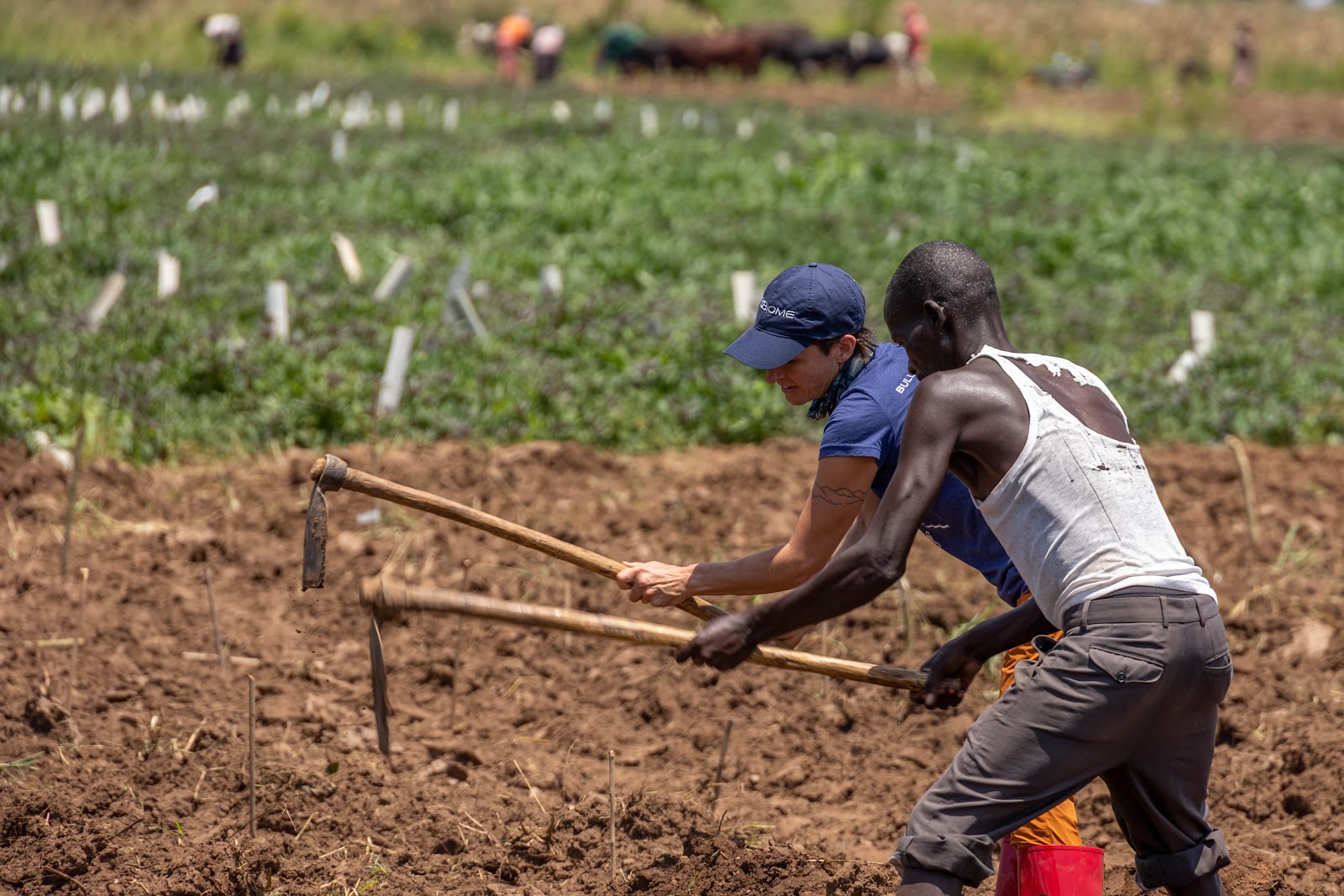 In order to protect roots from insect damage, vines are planted in mounds. Pictured is Robin helping to hand till the soil into 5 meter rows. 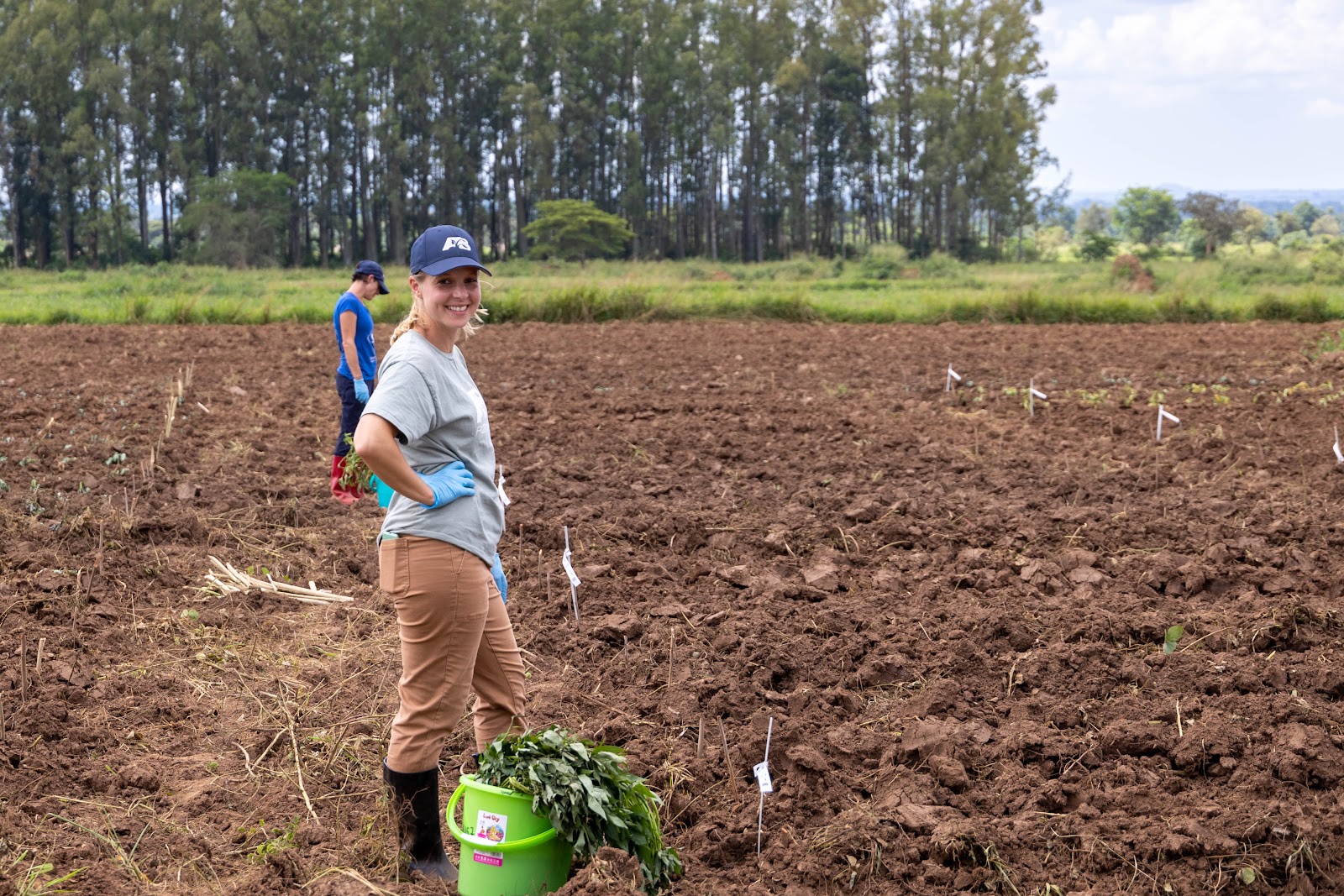 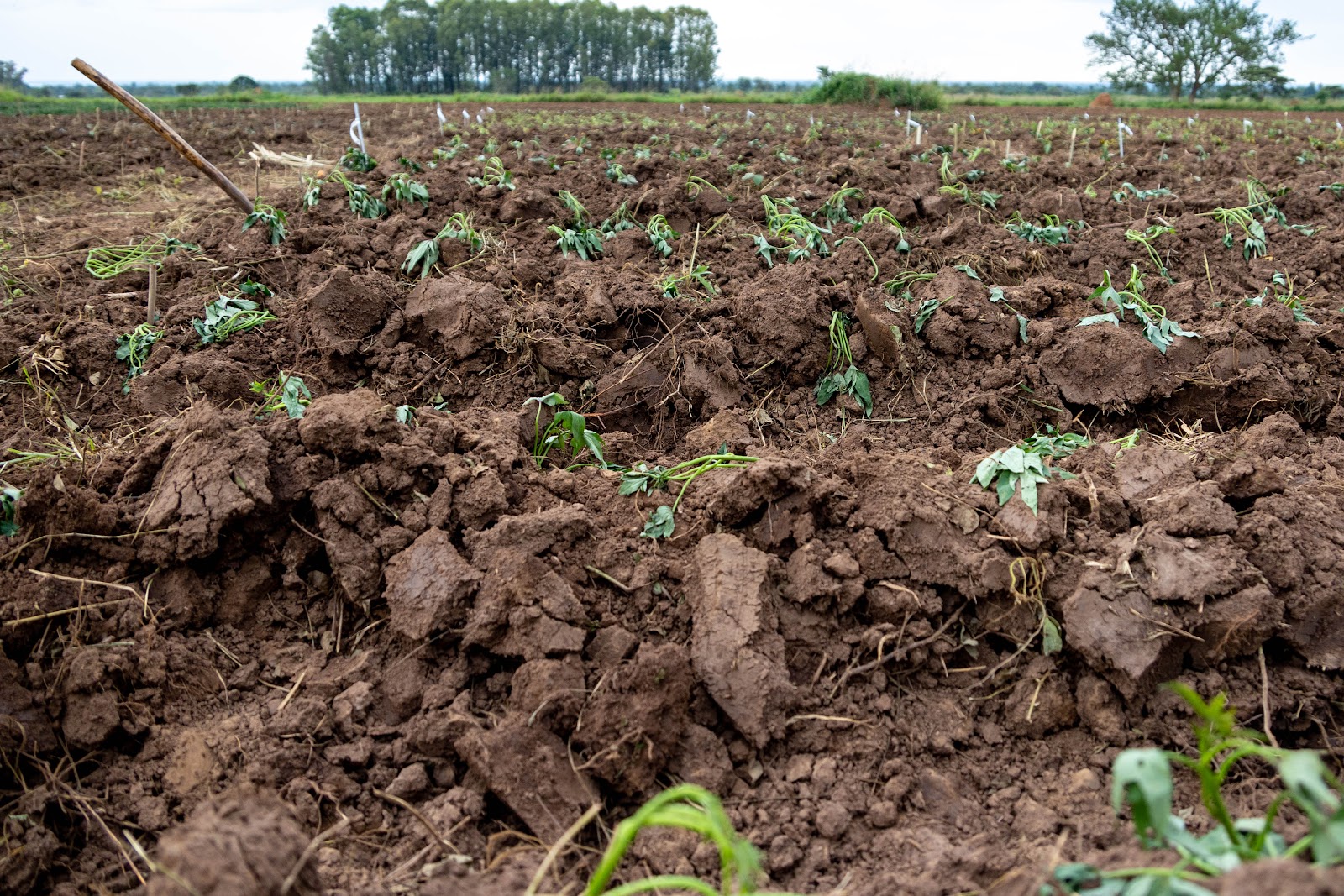 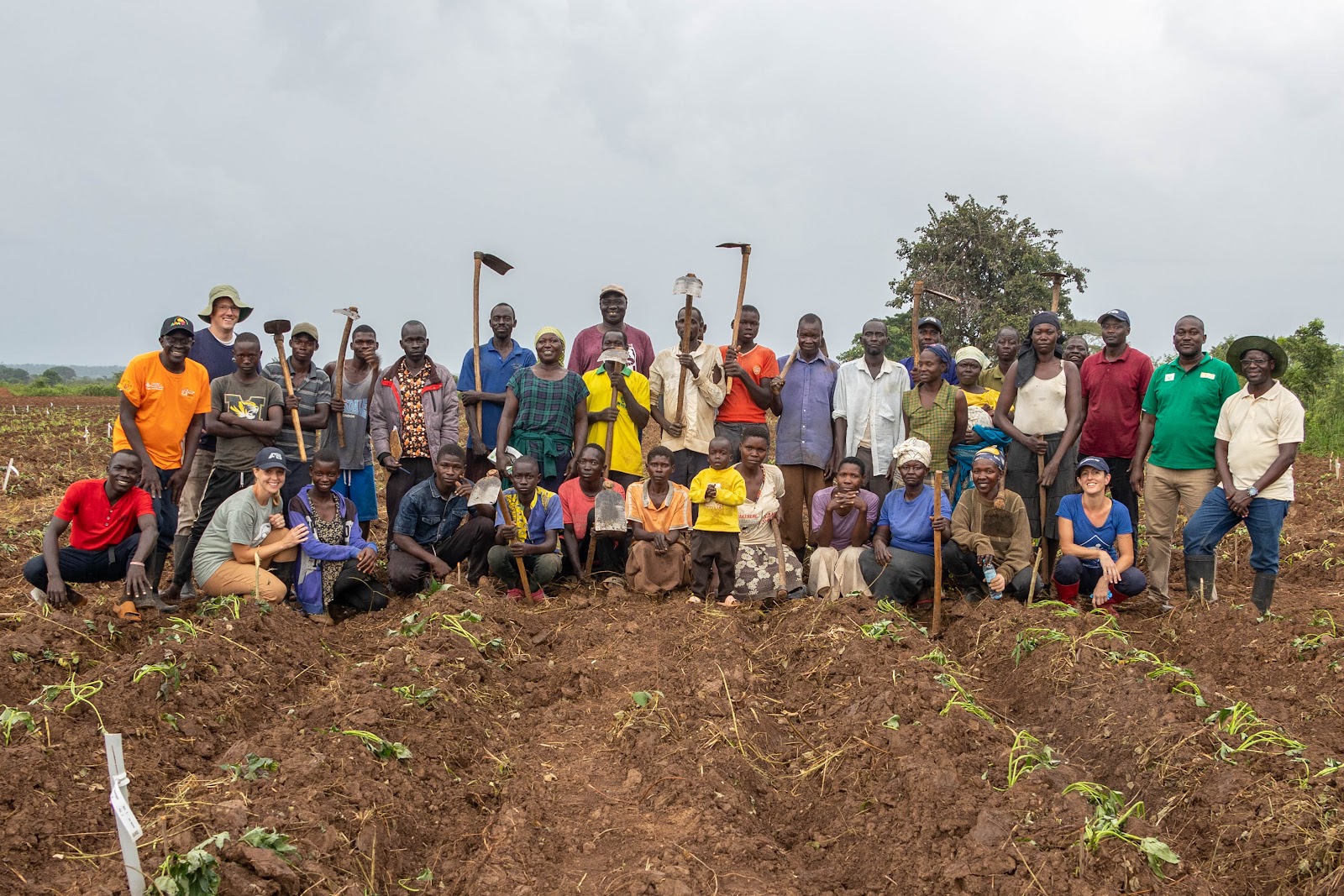 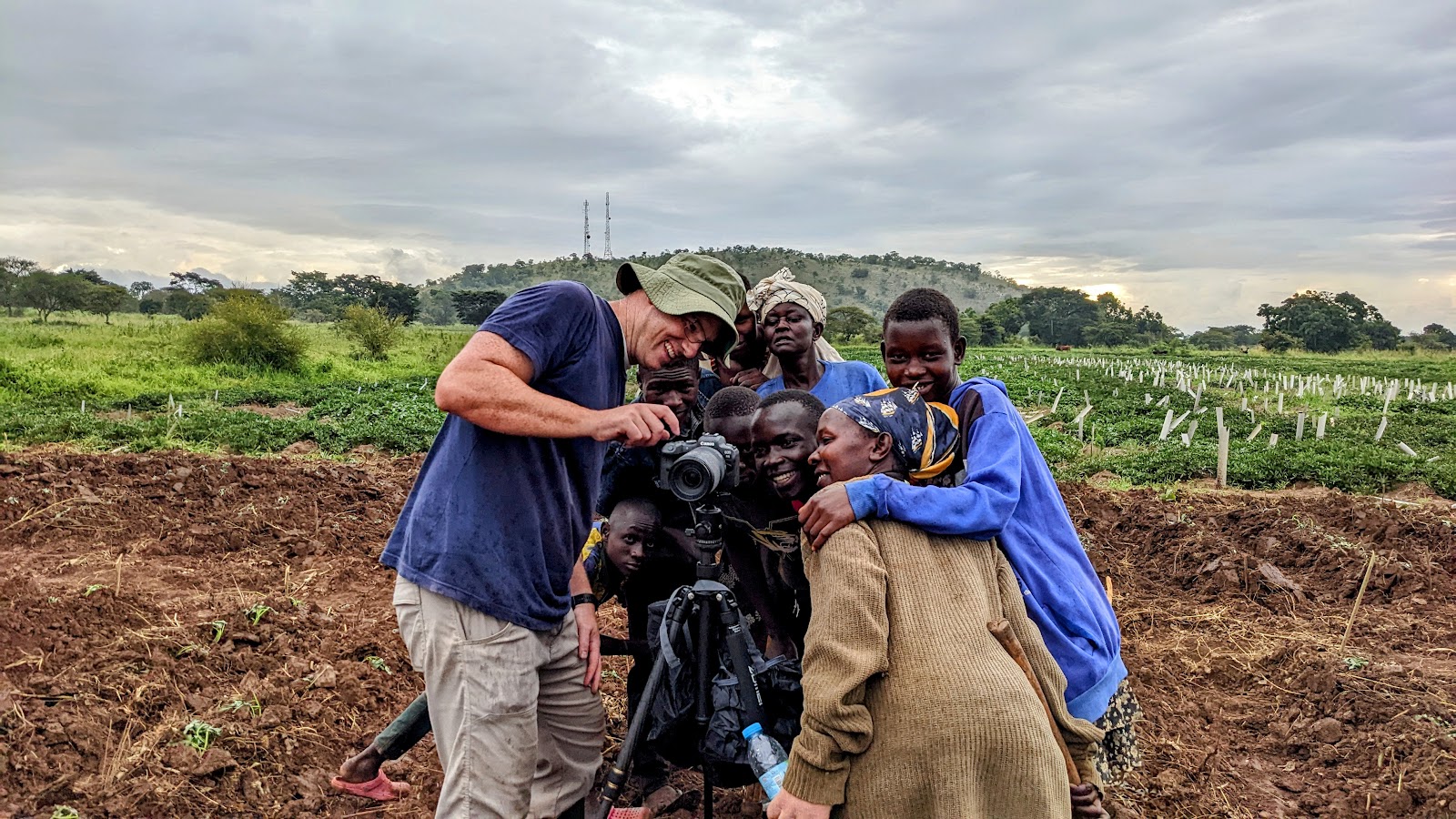